The front torsion bars have now been successfully reset and the camber of the front wheels done at the same time. Handling and ride are much better.
Next up has been an unwilling heater control, it didn't want to turn the heat off and with a long trip to Germany approaching fast I thought I had better tackle it. It turned out that I hadn't positioned the plastic collar that the heater cable attaches to properly within the tube. Within the tube there is a locating pin and the split in the tube passes over it to keep it in the right place and allow it to move up and down; get it wrong and no adjustment is possible. What had happened was that the split at the bottom of the plastic collar had closed up stopping the locating pin being correctly positioned. I took a file to the split, opened it up and this allowed correct positioning and easy heater adjustment.
Finally on this batch of never ending adjustments I tackled the passenger door where the window would not go all the way down and the door lock mechanism wasn't working correctly. With the door panel stripped off it was easy to see the problem. The sound deadening material I had fitted to the inside of the door panel had dropped part way off and was blocking everything. With it stripped off all now functions OK.
at July 21, 2011 No comments:

Activity on the mechanics of the car 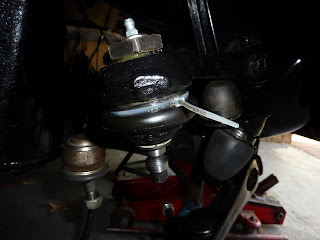 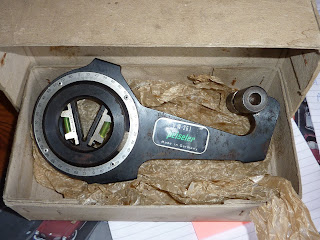 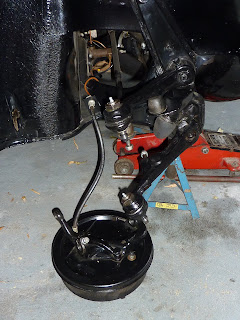 The hand brake (emergency brake)was taking a few clicks more than normal to activate and I decided rather than just adjust the rear brake shoes that I would take off the drums and check inside. No major problems, the shoes were a little glazed in places which I carefully filed off whilst wearing a face mask so as not to breath in the dust as they are NOS with asbestos in them.
The rear hub seal on the drivers side had been weeping a little but this was being taken care of satisfactorily by the internal oil thrower; I will keep my eye on it.
I had been experiencing a clonking noise from the back of the car when cornering and when I jacked up the car to do the rear brakes I found a simple solution, it was the fire extinguisher kept under the back seat that was simply moving around - I like easy solutions.
I also took the car to have the wheel weights moved to the inside of the wheels and have the steering alignment and rear wheel alignment checked out and laser aligned. My trusty contact at GM Tyres in Buckingham soon has it sorted and said how much he enjoyed working on something different and something that was clean and not rusted up.
Of a more major nature was the ride height of the front end; during the rebuild the front axle was taken to pieces, both to clean and check for wear and also to correct the lopsided set up I had inherited it with; easy to do as there are more splines on of the torsion rods than the other rod.
With some miles on the car the front end now seems to have settled by about 1" or 2.5cm and gave the appearance of slight customisation - actually looked quite good! However I decided I better get it back to stock ride height. So I have now removed the shock absorbers, tie rods and brake drums\steering knuckles ready to adjust the torsion bar arms on Saturday morning.
To do this I have borrowed the correct VW tool number 261 from Mike Dempster and will set the arms back to the correct factory settings. I will also set the castor and camber angles back to proper settings using the same tool - I had got these right at the rebuild by just looking at the arrows on the bottom of the ball joints of my 65 and copying to the 62 - the laser alignments showed I had them set up within tolerance.
Whilst working on dismantling the front end I noticed that one of the retaining rings around the ball joint boot had disappeared - I have replaced with a plastic cable tie and will trim back and cover in grease so you can't see it.
Finally a poor starting issue was traced to the replacement terminal I had fixed to the main positive cable going to the battery. This was made of brass and was reacting badly with the battery terminal producing clumps of corrosion within days of fitting. I found a non brass one and fitted it and now no further problems.
at July 07, 2011 No comments: