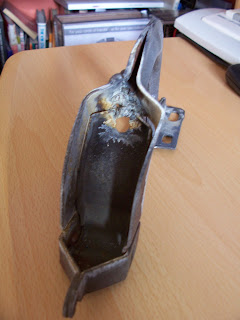 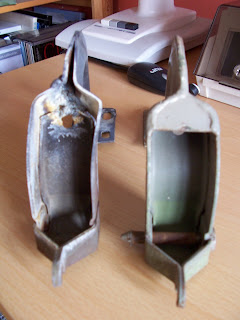 With March coming to a close I thought I would fit the front bonnet hinges that Clive Richardson donated last weekend at the Volsworld meeting.
Removing them was easy and I wasn't surprised to see that they were quite badly damaged and the cause of the poor fitting front bonnet.
You can see where the original one is bent and distorted as a result of the front end damage that the car suffered in an accident and also how it differs from the later one which has a re-enforcement plate fixed from side to side.
The bonnet has yet to go on but I am hopeful it will sit better with the new hinges in place.
at March 31, 2007 No comments:

Fire on the way to Volksworld 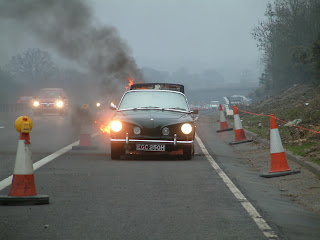 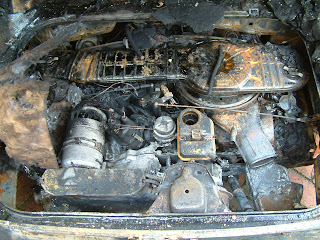 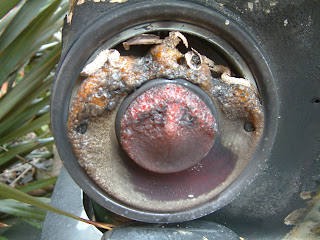 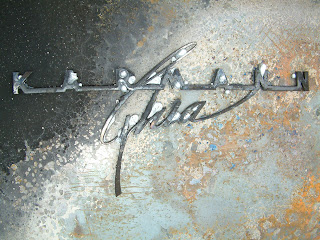 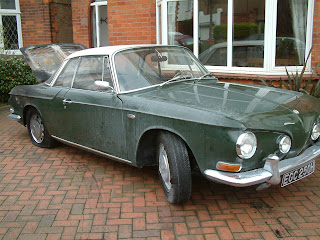 I mentioned in my last post that Dave Ball's automatic LHD suffered a serious fire on the way to Volksworld at the weekend. The car suffered an engine fire which Dave thinks was caused by a fluid leakage of some kind.

He managed to get out of the car and call the emergency services who put out the fire, but not until the rear end had been severely damaged.

The car was transported back home and is now awaiting insurance assessment. Dave came back to the show in his other car and even managed to do parts shopping for his bus restoration.

Bits collected at VolksWorld and other stuff 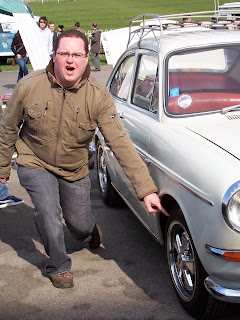 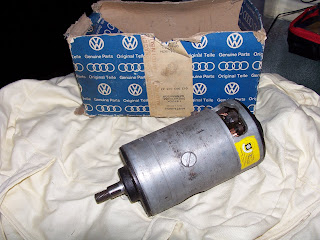 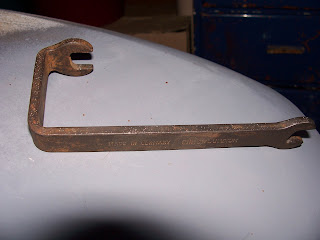 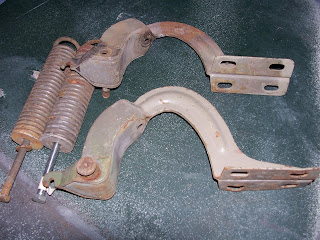 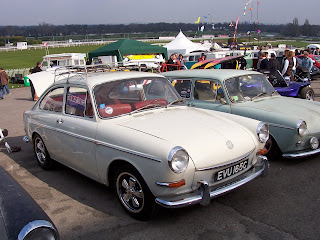 Went to Volksworld today. I collected a reconditioned generator for the 65 from Charlie H which will allow me to put the NOS one back on the 62. Charlie also supplied a special spanner for removing the carb from the 62, always good to have as it saves removing the manifold and to have mates who look out for bits for you.

Whilst I was with him Charlie distracted me by pointing to the new wheels on Mike Dempster's great looking white Fastie with pigale interior as a result of which the sun shone so brightly in my eyes from the reflections in Mike's wheels that I had to go and rest in my car.

Should Charlie post any photos on his own website, purporting to show me a sleep at the wheel of my car, then you will know that I was just trying to recover from the blinding glory that is Mike's car!

I also picked up a couple of replacement front bonnet hinges and springs from Clive Richardson which he has kindly donated. The front bonnet continues to sit incorrectly against the bodywork and I am sure it is the hinges that are bent. It will be all hands on to try and change these over next month in advance of some breaking news on progress with the car.

Finally I picked up a small item for the car, the little plastic caps that go over the wiper spindles at a woping £1.60 the pair, no expense spared on my project.


Some sad news, Dave Ball was due to be with us in his recently restored car but it experienced and engine fire on the way to the show. Thankfully Dave was OK and turned up later in the day safe and sound. I'll post some pics of Dave's car post fire and let's see if we can round some bits up for him to put it back into the condition he had reached after all his hard work.
at March 25, 2007 No comments: 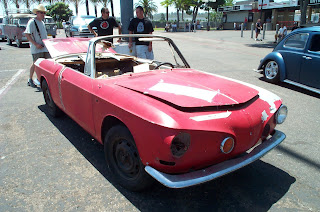 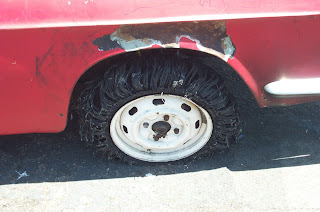 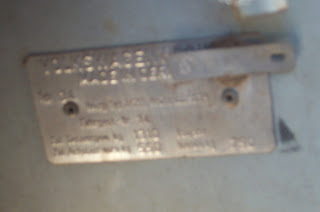 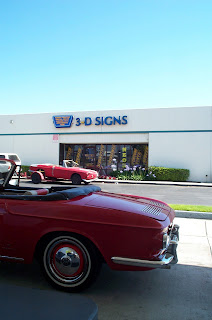 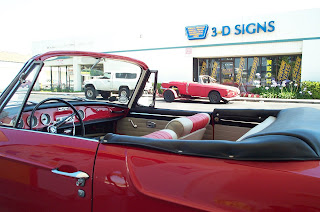 I was just looking through some old photo CDs and came across these shots i took at the VW Classic in 2004 which I went to with Lee Hedges, John House and many more T34 Registery friends.
This project has been aborted and the owner has towed the car there for sale, amazing he didn't die with the tyre blow out. There was nothing much worth saving on the car but strangely enough it still has stuck onto the vin plate in the front luggage area the small aluminium vin tag that they put onto the key rings when the car was at the dealership before sale. It had remained there all the cars life just held on by a small bit of mastic.
I love the photos of Lee's cabrio in the front and the wrecker in the background.
at March 16, 2007 No comments: 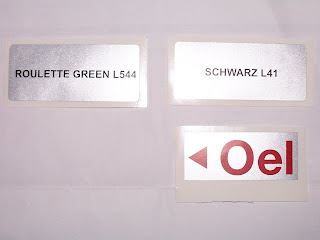 Here is a quick photo of them along with a paint sticker done for my roulette green 65 344. 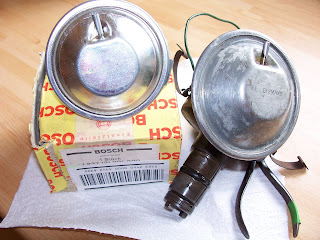 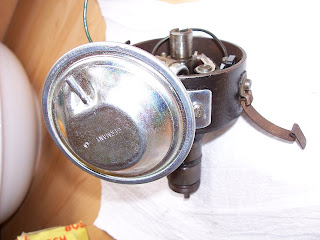 I picked up a NOS vacuum advance unit off the Samba recently and it was forwarded on to me by Jason Weigel and arrived this morning. I have now swaped it for the original one which had a fairly weak diaphram in it and fitted it back on to the engine.
at March 10, 2007 No comments: 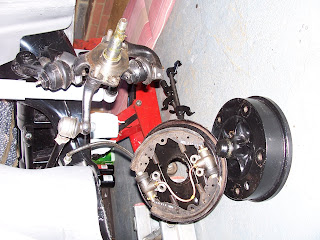 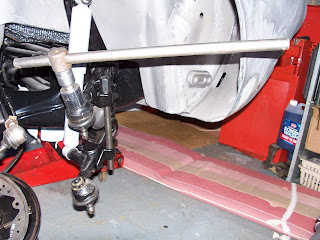 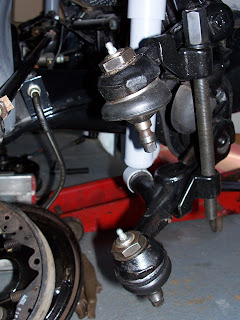 was time to get under the car and change the ball joints for the correct early style ones with the grease nipples that I bought from BerT3.

The VW workshop manuals says you can leave the brake drum in place when removing the steeing knuckle from theball joints but I don't like the idea of all that weight hanging on the flexible hose so I took the drums off. Good job I took the drums off as I found that I made the shape of one of the balance pipes between the front wheel cylinders incorrect and the inside of the drum has been rubbing on the brake pipe. Looks like I will need to make a new one.

To get the hexagonal nuts off the ball joints the breaker bar I use for the rear wheel hubs was used and with a bit of persuasion they came off fairly easily. Spring compressors worked well to pinch the upper and lower arms together and aid removal of the steering knuckle.
One of the ball joints was still an original VW one with grease nipple. The new ones went in fairly trouble free and everything was torqued up to the correct settings as per the manual and re-assembled.
Of the 4 ball joints I removed a couple feel very loose so I am glad I have replaced them. The replacement ones all needed repacking with grease and are a bit stiff at the moment but should loosen up when the car goes back on the road eventually.
at March 03, 2007 1 comment: